​   This painting depicts a TWA DC-3 leaving the Albuquerque airport in the late 1940s. It was commissioned as a
monochromatic presentation to capture the period look and to complement the decor of the location in which it is
​   being hung.

​   This painting was inspired by a photo taken by my mother during dad’s last trip before retirement. Mom was supposed to
be on the airplane the night before to fly to Detroit and back, but the plane was full and she stayed in St. Louis. After the
flight left, St. Louis got hit with a snowstorm and dad ended up spending the night in Detroit. Mom snapped the photo
early the next morning as dad prepares to pull his 727 into a gate back at Lambert Field in St. Louis. Mom was able to
fly the rest of the trip with dad as his TWA career ended. A few years later TWA was purchased by American Airlines.

​   In 1955 the Constellation Super-G entered service with TWA and is depicted here at the Kansas City Municipal Airport
with TWA headquarters and the distinctive Kansas City skyline in the background. The first ever Constellation to visit
Kansas City was TWA NC86500 “Star of the Mediterranean” a L-049 model, which landed on the 15th of November
1945. Only three month’s later, TWA inaugurated it’s international services from Washington, DC to Paris via New York,
Gander and Shannon. Constellations would continue to fly with TWA until May 11,1967, when the airline became “all jet.”

The first launch out of St. Louis early one dreary, overcast morning, air traffic control directs this TWA flight to level off at an intermediate altitude of 10,000′ due to traffic in their climb out path. Just as the captain is leveling, the aircraft pops
​                                                                         out of the undercast into a beautiful sunrise. At or above 10,000′ there is no longer a 250 knot speed restriction, so the
captain leaves the throttles set and begins to accelerate rapidly in the smooth, clear air just a few feet above the clouds,
giving everyone on board an accurate depiction of how fast they are really going. Once cleared higher, the captain
exchanges the airspeed for altitude with a dramatic climb as the cloud tops quickly fall away. 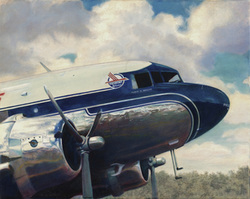 ​In 1986, Piedmont Airlines acquired this aircraft, which was declared surplus after World War II and had since belonged to several air cargo companies. Piedmont restored it to its original airline configuration and repainted the exterior in the color scheme and insignia used by Piedmont from 1948 to 1963. In the process, the aircraft’s civil registration was changed to N44V. N44V was the number of the fifth DC-3 purchased by the airline.