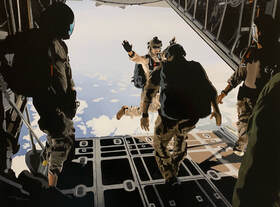 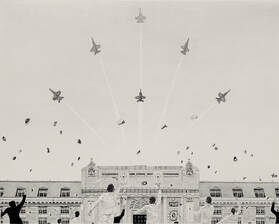 Midshipmen “toss their covers” in front of Bancroft Hall at the United States Naval Academy as the
​   Navy’s Blue Angels fly over in May of 2020.  Graduation in 2020 was done in five swearing-in
ceremonies and one virtual ceremony due to the COVID distancing restrictions in place at the time.
The cover toss is a tradition which ends the ceremony that originated in 1912. The Naval Academy
prepares young men and women in four years of instruction, and physical, mental and leadership
testing, to become professional officers of competence, character and compassion in the U.S. Navy
and Marine Corps. 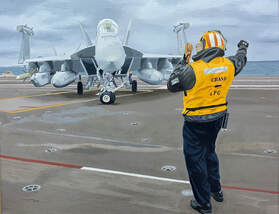 One of many aircraft handlers, identified by wearing a bright “yellow shirt,” is responsible for
directing aircraft around the carrier’s relatively small and chaotic deck. As one can imagine, the
deck of a carrier is a very loud place, so the handlers “speak” through a myriad of hand signals. His
current signal is directing the pilot to turn hard left, and during the turn the pilot will be directed to
another yellow shirt handler, the catapult officer. The Growler is an EA-18G, which is an electronic
warfare version of the Boeing F/A-18 Super Hornet that joined the fleet in 2009 to replace the aged
Northrop Grumman EA-6B Prowler. It is capable of jamming enemy communications, and
airborne and surface-to-air radar, as well as being capable to perform all other missions of the
Super Hornet. 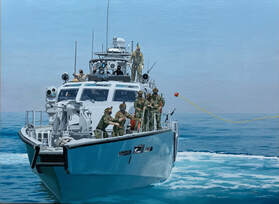 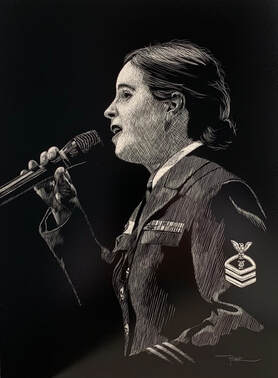 Depicted is a vocal soloist with the United States Navy’s official chorus, the Sea
Chanters. The ensemble performs a variety of music including traditional choral music,
sea chanteys, patriotic fare, opera, Broadway and contemporary music. The Sea
Chanters perform for the public regularly on national tours and in Washington, D.C.
While in the nations capital they perform for the president, vice president and
numerous congressional, military and foreign dignitaries.

In 1956, Lt. Harold Fultz, then the band’s assistant leader, organized a vocal group from
the Navy School of Music to sing chanteys and patriotic songs for the State of the
Nation dinner. Recognizing the ensemble’s immediate success, then CNO Adm. Arleigh
Burke transferred the group to the Navy Band, gave them their current name and
tasked this all-male chorus with perpetuation the songs of the sea. In 1980 the group
added women to its ranks and expanded its repertoire to include everything from
Brahms to Broadway. 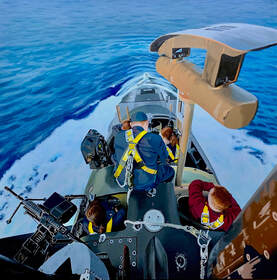 This is the bridge of the USS Florida as it conducts routine navigation and watch
procedures on the surface of the Mediterranean Sea in the fall of 2019. The USS Florida
is the first submarine and the sixth United States Navy ship to bear the name of the
state. It was the second submarine to complete the conversion from a ballistic-missile
​   submarine to a guided-missile submarine.

Straight-In to the Carrier
8x30 Oil on Linen 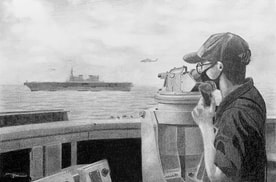 On Watch
10x15 Graphite on Illustration Board 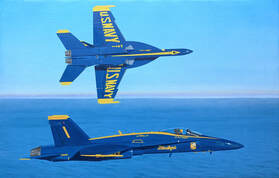 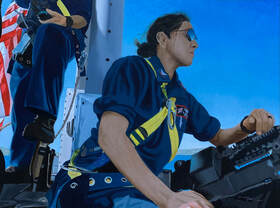 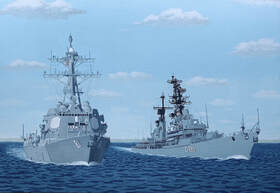 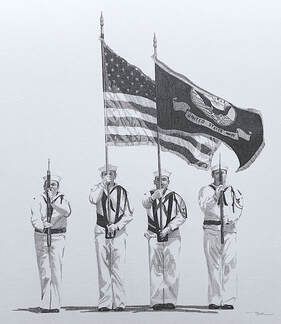 Each military branch has its own Honor Guard. Most state National Guard units have a
ceremonial guard as well. The official Honor Guard of every branch is based in
Washington, D.C., though nearly every military installation will have its own Honor
Guard for local ceremonies and events. 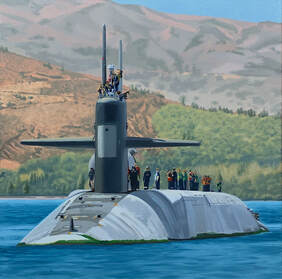 Some Sun Before Diving
20x20 Oil on Canvas

In November 2019 the nuclear submarine USS Florida is surfaced in the eastern
Mediterranean Sea while conducting training and preparing for a new specialized
mission. Three of the seven crewmembers on the bridge are female following a policy
change made by the US Navy nine years earlier allowing females to serve on
submarines. While surfaced it is also a fairly rare opportunity for submariners to get
​   some sun during a deployment. 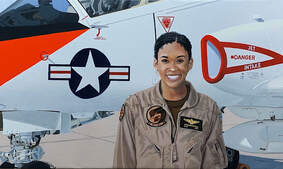 On 31 July 2020 Lt JG Madeline Swegle graduated with 25 of her classmates at NAS
Kingsville, Texas and became the first known black, female tactical air pilot to serve in
the US Navy. She received her gold wings having successfully completing advanced
training in the aircraft behind her, the T-45C Goshawk. Lt Swegle will next report to the
“Vikings” of Electronic Attack Squadron 129 at NAS Whidbey Island in Washington
State to begin training as an EA-18G Growler pilot. VAQ-129 trains new naval aviators,
naval flight officers, and naval aircrew in electronic warfare tactics, techniques, and
​                                                                  procedures in advance of their fleet assignments. 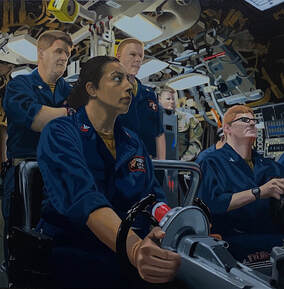 At the Controls
20x20 Oil on Canvas

In 2010 a major policy change was adopted by the US Navy that allowed female sailors
to serve on submarines. Here, handling the helm on the USS Florida is a Petty Officer
First Class. Her job is to control the rudder, and the sail planes. The sailor to her left is
the outboard watch stander, who he controls the rear planes. The two, acting together,
maintain the ordered direction, roll, pitch, depth of the sub as ordered by the Dive
​   Officer of the watch, standing between and behind them.

On 14 May 2020 VP-40, based at NAS Whidbey Island, Washington completed the
transition from the propeller-driven P-3 Orion to the new P-8 Poseidon when its last
P-3C, aircraft number 162776, was flown from Whidbey Island to NAS Pensacola.
VP-40 was the last active duty patrol squadron flying the Orion, an anti-submarine
warfare champion for nearly sixty years. All P-3 squadrons have now transitioned to
the P-8, which is a Boeing 737-800ERX modified for the US Navy and several allied
nations. Two Naval Reserve squadrons, VP-62 at NAS Jacksonville and VP-69 at NAS
Whidbey Island will continue to fly the Orion until 2023, and Air Test & Eval Squadron
30 at NAS Pt. Mugu will continue to fly the Orion past 2023. 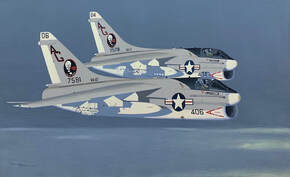 ​In the fall of 1973 VA-12, “The Clinchers,” was flying A-7 Corsair II aircraft as part of
Carrier Air Wing 7 aboard the USS Independence (CV62.) The cruise was to the
Mediterranean Sea amid increased tensions in the area surrounding the Yom Kippur
War between Israel and its Arab neighbors. Here two A-7s return from a mission,
catching a brief burst of sunlight before descending into the undercast that separates
them from their carrier home. The wingman has pulled into fingertip position to be
​                                                                    able to maintain the formation until through the clouds. 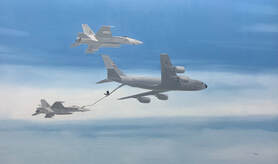 Two Navy F/A-18 Hornets of VFA-143 (Fighter Attack Squadron 143,) the famous “Pukin’
Dogs," assigned to the USS Abraham Lincoln are topped off by an Air Force KC-135
tanker from an undisclosed Air Force Base. Being able to refuel very quickly in flight
allows the Hornet to carry more ordinance at take-off and to extend its range or loiter
time, limited only by the endurance of the pilot. Aerial refueling has come a long way
since 1923 when its first trials of manually extending the equivalent of a garden hose
from a hand-held tank in one bi-plane to a second bi-plane by removing the gas cap and
inserting the hose like normal into the gas tank.

Naval Air Staton Oceana is the U.S. Navy F/A-18 Hornet and Super Hornet fleet’s east
coast home, accomplishing 219,000 training operations each year. With this volume of
training the flight line is kept very busy. Just some of the things required of the ground
crews to get an F/A-18 ready for a training flight include fueling, topping off hydraulic
fluid and oxygen, testing avionics and other systems, practice munitions, strut and tire
pressure, making sure all fasteners are in place and closed, ensuring the engine
intakes are clear, removing any foreign objects from the cockpit, removing dead bugs
from the windshield and much more. As depicted here, in July of 2018 the base’s
location in Virginia Beach was experiencing the usual very hot and humid weather,
​                                                                 making for very uncomfortable working conditions.

In March of 2020 President Trump ordered the US Navy’s two hospital ships to
America’s two largest cities. The USNS Comfort was sent to New York City and the
USNS Mercy was sent to Los Angeles. On Friday 27 March the Mercy docked at the
Cruise Terminal of Port of Los Angeles to aid in hospital relief during the COVID-19
virus worldwide pandemic by adding a highly-trained Navy medical staff, twelve
operating rooms, a laboratory and pharmacy, and 1000 beds to releive area hospitals of
non-COVID-19 patients while the hospitals handled mainly virus cases. After a few days
area hospitals were vastly expanding their ICU capabilities and releif wasn’t critical, so
some of the medical staff of USNS Mercy was deployed ashore to area skilled care
retirement facilities to help fill a critical need where most of the new virus cases are
being identified. 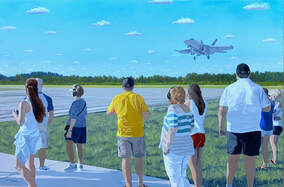 As Navy pilots near the end of their advanced F-18 training at NAS Oceana in Norfolk,
Virginia a “Family Day” is organized to allow friends and family of the pilots to see first
hand some of the activities and facilities in which their pilot have trained during the
lengthy time they have been there. Included in the trainee-led tour is the maintenance
hangar, flight line, squadron briefing for the day’s sorties, and depicted here, a trip to
Navy Auxiliary Landing Field (NALF) Fentress located roughly twenty miles away from
NAS Oceana. The purpose of an NALF is to reduce congestion in the landing pattern
at the main base when to focus of the mission is on practicing flying the “ball” for
pinpoint landings simulating carrier landings. The families are allowed to get right up
to the runway at the approach end to watch their pilots practice simulated carrier
landings. In about four weeks the pilots will graduate and be assigned to a carrier
​                                                                   squadron in the fleet. 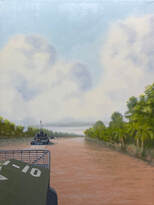 In mid-October of 1968 multiple divisions of the US Navy’s Mobile Riverine Task Force 117, River
Assault Squadron 9 (part of what had earlier been formed as the “Brown Water Navy,) traveled north on
the Ham Luong River just upstream from the city of Ben Tre in the Mekong River Delta with US Army
forces aboard. Most of the vessels depicted were called “Tango Boats,” or Armored Troop Carriers
(ATCs.) These boats were used by the US Navy to transport and provide cover fire during insertion and
extraction forces of the Army’s Ninth Infantry Division according to their military objectives in the
delta. Waterways served as the “highways” of this region, and the US Navy was tasked with keeping
them open for friendly military and civilian economic use while at the same time interdicting the
transport of enemy forces and materials.