​    Depicted is an F-18C from NAS Oceana practicing carrier landings at the base’s auxiliary landing field. The
pilot flying the aircraft is the son of friends of mine. I took the reference photo during one of the great
events put together for “Family Day.” In about two weeks after this day the pilots in this class graduated
from this advanced training and were assigned to specific carriers and squadrons.

In my nine-years in the Air Force I flew only one actual precision approach down to minimums. It
was on a mission from Mildenhall AB, England to Ramstein AB, Germany. This painting depicts the
​   event.

Depicted is a four-ship sortie near graduation for the students involved, flying in one of the Reese
AFB northwest training areas near Lubbock, Texas. The major landmark in this area is the little
town of Muleshoe, Texas.

​   Depicted is a B-52D of the 6th Bombardment Wing at Walker Air Force Base in Roswell, NM, in
1965 as part of the airborne alert of strategic forces during that era. The co-pilot is my father. I
​   painted this one monochromatically to further indicate the era. 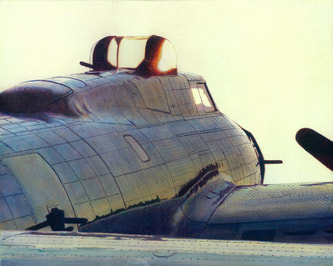 ​The day began very early; hours before sunrise, and included a round trip deep into Germany. The damage from the enemy’s shells and shrapnel has been repaired as the sun sets over the English countryside. There will be little rest; the Group has been alerted and there is “Another Mission Tomorrow”.

Tweet Solo
12 x 24 Oil on Canvas
$1025
​
The reference photo for this painting was taken of me by one of two instructors in the other jet on my
formation solo sortie at Reese AFB in Lubbock, Texas. It was one of my last T-37 sorties before
transitioning to the T-38 for the last half of Air Force Undergraduate Pilot Training. 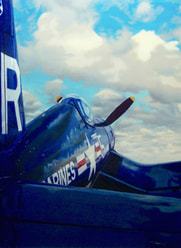