King Air 100
15x30 Oil on Canvas
Sold
​
Star of the Time Saver Aviation fleet, based at the Moore County Regional Airport in the
Pinehurst/Southern Pines/Aberdeen/Whispering Pines area of North Carolina.

Navajo Chieftain
15x30 Oil on Canvas
Sold
​
Second in the Time Saver Aviation series is a Navajo Chieftain, which is equipped with the
Panther modification, including winglets on the wings and on the propeller blades. 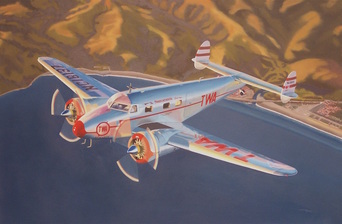 Ellie
24 x 36 Oil on Canvas
Sold
​
Built as “Number 240” in 1937 at Lockheed Aircraft’s Burbank, California, factory for Continental
Airlines, this Electra 12A Junior was sold to Transcontinental and Western Air in 1940, and was
operated until 1945 an executive transport and an airborne research laboratory. At the end of
World War II it was sold to the Texas Oil Company. “Ellie” was purchased in June 2005 by Ruth
Richter Holden, daughter of  TWA co-founder Paul Richter, Jr., and returned to its TWA livery.
The aircraft is now based in California, but on occasion you can catch it at the TWA museum
​   located at the Charles B. Wheeler Kansas City Downtown Airport.

“…for I have been to the secret place: a place so holy that a person can only go there on wings…..and only once…..and only alone."