U.S. Navy Flag
9 x 12
$385
Prints Available
The U.S. Navy traces its origins to the Continental Navy, established during the Revolutionary War and was essentially disbanded as a separate entity shortly thereafter. It played a major role in the American Civil War by blockading the Confederacy and seizing control of its rivers. It played the central role in the World War II in supplying food and weapons to allied forces in Europe and Africa, and was integral in the defeat of Japan. The 21st century U.S. Navy maintains a
​                                                     sizable global presence making it an active player in U.S. foreign and defense policy. 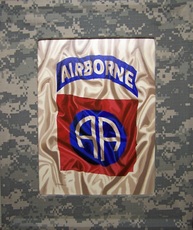 82nd Airborne Division Flag
9 x 12
$425 Framed as Shown
​Prints Available
The 82nd Airborne Division is one of the most famous and highly decorated units in the United States military with a long history of superlative service, both in peacetime and war. The “white” areas of this flag were painted with a brownish motif that ties in to the unit’s recent service in the deserts of southwest Asia. Shown framed with a custom BDU lined frame.